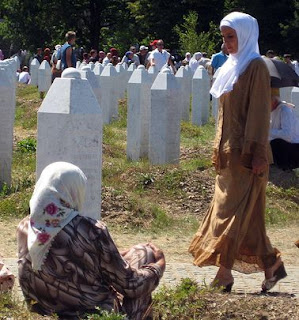 AMSTERDAM, March 19 (Reuters) - Dutch government officials reacted angrily on Friday to claims by a retired U.S. general that Dutch forces were overrun in Srebrenica in 1995 in part because of the presence of gay soldiers.
At a U.S. congressional hearing on Thursday on allowing gay soldiers to serve openly in the military, former Supreme Allied Commander John Sheehan said there was a link between having homosexuals in the Dutch forces and the massacre at Srebrenica.
Bosnian Serb forces overran lightly armed Dutch soldiers in the United Nations-designated enclave of Srebrenica in July 1995 and subsequently massacred more than 7,000 Muslim men and boys.
Reports on the hearing said Sheehan blamed a post-Cold War effort by European nations to "socialise" their forces by, among other things, letting gays serve.
"That led to a force that was ill-equipped to go to war. The case in point that I'm referring to is when the Dutch were required to defend Srebrenica against the Serbs," Sheehan said.
"The battalion was under-strength, poorly led, and the Serbs came into town, handcuffed the soldiers to the telephone poles, marched the Muslims off, and executed them."
Carl Levin, chairman of the U.S. Senate's Armed Services Committee, asked: "Did the Dutch leaders tell you it was because there were gay soldiers there?"
"Yes, they did. They included that as part of the problem," Sheehan said, according to a webcast on the website of the Senate Armed Services Committee.
"That there were gay soldiers?" Levin then asked.
"That the combination was the liberalisation of the military, a net effect was basically social engineering."
The Dutch Defence Ministry issued a statement calling Sheehan's claims "absolute nonsense" and adding that gay Dutch soldiers routinely cooperate with the U.S. military in the NATO mission in Afghanistan.
Renee Jones-Bos, the Dutch ambassador to the United States, said in a statement, "I couldn't disagree more" with Sheehan, adding there was no evidence of his claims in the extensive record of research on Srebrenica.
Dutch press agency ANP quoted the head of the military union AFMP, Wim van den Burg, as saying Sheehan's comments were "ridiculous" and "out of the realm of fiction".
The events in Srebrenica remain a sensitive subject in the Netherlands, where a six-year investigation into the massacre led to the government's fall in 2002.